What are fender Piles?

When the soil is added with water enough to make it paste like material it is termed as plastic state; in this state the soil can be molded into any shape without breaking and thus called plastic. If more water is added into the soil it will start flowing like a liquid; this state is termed as liquid state.

Have you ever visited a beach? Played with sand castles? If yes than you are lucky enough to physically use one of a very vital and important characteristic of soil which is termed as plasticity. Soil when added or applied with water go through many stages and phases. When water or moisture is absent soil is in dry state which is termed as solid state; in this state soil has sufficient shear strength and resistance for any shearing that may occur. This scope of this article is limited therefore we can not explain this in detail we will do that in another article so stay updated for any future article.
Water, due to its dipolar nature, reacts with negatively charged fine particles of clay mineral present in the soil; this reaction, termed as adosption of water is the basic reason of the plasticity.
Atterberg who was a Swedish Agriculture engineer explained that fine-grained soil can exist in four states namely, liquid, plastic, semi-solid or solid state. The water contents at which the soil changes from one state to the other are known as consistency limits or Atterberg’s limits. 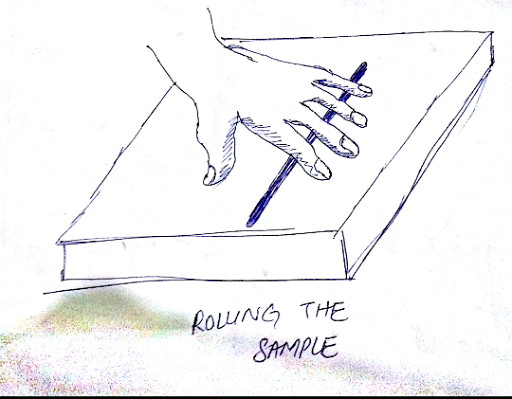 Atterberg limits i.e. liquid limit and plastic limit, of soil are very important in construction. As water content drastically influences properties of fine-grained soils. Thus knowing the liquid limit and plastic limit is very important before constructing anything on the soil as the foundation of the structure directly transfers the load to the underneath soil.
Now let’s talk about Plastic Limit and How we can find the plastic limit of the soil in the laboratory:-
Plastic limit, by definition, is the water content at which the soil is just about to lose its plasticity and passes to a semi-solid state. In terms of the experiment which we are now going to perform; plastic limit is the water content below which the soil stop behaving like a plastic material. It begins to crumble when rolled into a thread of soil of 3 mm diameter.
Designation
The experiment is designated under the standards of AASHTO T 90-96 and ASTM D4318
Apparatus
The apparatus that would be required to perform the experiment is as under :-
1. Porcelain dish
2. Spatula or Knife
3. Glass surface for rolling
4. Balance
5. Drying oven
6. Container for moisture content determination
Sampling
Take a sample of about 20-gm of soil passing the No. 40 or 0.425 mm sieve. Thoroughly mix the sample with distilled water until the mass becomes plastic enough to be easily shaped into a ball. Take a portion of this ball (about 8 gm) for the test sample.
Procedure
Deform 8-gm test sample into an ellipsoidal-shaped mass.
Roll this mass between the fingers or palm on the glass plate with just sufficient pressure to roll the mass into a thread of uniform diameter throughout its length.
The rate of rolling shall be between 80 to 90 strokes per minute.
When the diameter of the thread becomes less than 3-mm, break the thread and squeeze the pieces into a uniform mass of ellipsoidal shape and re-roll.
Continue this alternate rolling to a thread of 3-mm in diameter, gathering together, kneading and re-rolling, until the thread crumbles under the pressure required for rolling and the soil can no longer be rolled into a thread.
The crumbling may occur when the thread has a diameter greater than 3-mm. This shall be considered a satisfactory end point, provided the soil has been previously rolled into a thread 3-mm in diameter.
Gather the portion of the crumbled soil together and place in a suitable container to determine the moisture content and record the result as the plastic limit.
Calculate Plasticity Index
Report the plastic limit to the nearest whole number. Calculate the plasticity index of soil as the difference between its liquid limit as determined in experiment No. 1 and its plastic limit as follows :-
Plasticity Index = Liquid Limit – Plastic Limit
Report the difference calculated as plasticity index except under following conditions :
a. When the liquid limit or plastic limit cannot be determined, report the plasticity index as NP (Non-plastic).
b. When the plastic limit is equal to, or greater than, the liquid limit report the plasticity index a NP.
Tags: Lab Tests Laboratory Experiments