By Saad Iqbal
Of course, many people have often heard the saying (but never really payed any attention to it) that driving is one of the most dangerous things we do in our daily lives. Indeed, getting behind the wheel of your ride and heading off to work or some other destination can be very dangerous. Statistically, the number crunchers say that you are far more likely to die driving your car than flying in a plane. The numbers seem to back this up by showing that over 90 people are killed every day in motor vehicle accidents in the US alone. It all makes sense once you think about it. If you think about all the people out on the road and add in distracted and drunk drivers, mechanical failures and bad weather then it’s easy to see why driving can be so dangerous.
But what about the actual sections of roads and highways that seemingly have a high number of accidents and fatalities all year round. That is, it can be bad enough driving on ‘regular’ roads and highways around the world but there are roads which, for whatever reason, just seem more dangerous than the rest. You are probably picturing the classic mountain side road, carved into the rock with minimal safety barriers and exposed to landslides and all the inclement weather you can think of. Yes, those roads are very dangerous, but they aren’t the only ones to avoid driving on.
As part two of our ‘dangerous roads’ series, we look at 10 roads you probably wouldn’t want to drive on. These motorways are found all across the world, in all sorts of environments and at all sorts of altitudes. There are the expected mountain roads – narrow and crumbling where one small mistake means you are going for a very long fall. There are also the remote and isolated highways running through deserts and the vastness of Siberia. There are even the sea level roads which provide their own nasty little surprise that can ruin your day (or life). We guarantee that after seeing this your daily commute will appear to be a walk in the park.

The Passage du Gois (also known historically as Gôa) is a natural, periodically flooded passage leading to the island of Noirmoutier in France. It is located between Île de Noirmoutier and Beauvoir-sur-Mer, in the department of Vendée. It is flooded twice a day by the high tide. Length of this track is 4.125 km. At first glance you might think that’s not a bad road to drive on. Wait a few hours and your opinion will change as the tide comes in and causes the entire road to vanish. Twice a day this road is underwater and any car that mistimed their crossing are going with it. Even if you time the tides just right, driving this road can be a change because its wet and covered in seaweed which can make it as slippery as ice.
The passage was first founded in 1577; the name Gois derives from old French and is the same origin as the modern word gué (forded).Every year, a foot race – the Foulées du Gois– is held across it, starting at the onset of the high tide.

Perdikaki-Patiopoulo is a mountain road with a length of 23.5 km, located in the northeastern part of Aetolia-Acarnania, Greece. This road is a steep climb or decent: over the length of this road, the elevation changes nearly 500 meters. Full of twists and turns, the road is also incredibly narrow and has a sheer drop on the edges with no rail to protect vehicles from plummeting off the edge. Over the 23.5 KM length of this greek road, the elevation changes almost 500 m. This might not sound so bad to you right now, but through in a lot of potholes, significantly tight twists and turns, heavy trucks, pedestrian and livestock traffic and the fact there are very few if any, guard rails and you have one dangerous road. The icing on the cake for this particular route is that there are often no lines or marking which means many night time travelers drive straight off the road to their death.

The road that links the ancient city of Luxor in southern Egypt and Hurghada, the regional hub for several scuba diving resorts on the Red Sea, is a death trap. It\’s extremely dangerous with many head-on collisions and fatal accidents due to drivers not turning on their head lights. The reason for drivers keeping their lights off is because bandits and terrorists patrol the roads and shoot at drivers.
First the road goes through some rather remote areas where a breakdown mean big trouble depending on what time of the day it is. The Taroko Gorge Road in Taiwan is another mountain route made by carving out rocks, like the Guoliang Tunnel road. Despite its name, the Central Cross-Island Highway is a narrow and winding mountain road, and only a bus can barely pass by at a time. But the highway itself is truly an engineering masterpiece, as it cuts through the mountains and joins the East and West Coast. It\’s full of blind curves, sharp turns, and narrow paths leading through cliffs and mountains. 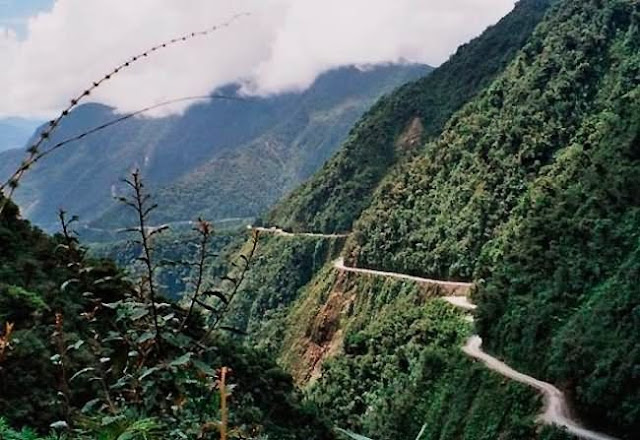 Part of Tiwans highway no. 8 the taroko gorge road is widely considered to be the country’s deadliest stretch of roadway carved into, and sometimes through, the mountainous terrain, this road faces significantly erosion and landslides thanks to heavy rain and earthquakes.

The Skippers Canyon Road, located in in the south-west of New Zealand\’s South Island, is today one of New Zealand\’s better known scenic roads and unbelievably scary as it’s totally narrow and different to manouvre your car. This gravel road, with a length of 16,5 miles, carved by hand by miners over 140 years ago is made from a very narrow cut in the middle of a sheer cliff face. It’s a road so dangerous that your rental car insurance won’t be honored if you drive on it. Halsema Highway (also known as the Benguet-Mountain Province Road, Baguio-Bontoc Road or Mountain Trail) is a national highway in the Philippines. Situated within the Cordillera Central range in northern Luzon, it stretches from the city limit of Baguio to the municipality of Bontoc. At its highest point at 7,400 feet (2,300 m) above sea level in the municipality of Atok, it is the highest altitude highway in the Philippines.

The Tianmen Mountain Road knows how to pack a punch. At just under 6.2 miles in length, the route boasts a total of 99 turns and 3,937 feet in elevation gain. The road, which is also called \”Heaven-Linking Avenue,\” leads to the summit of Tianmen Mountain and to Tianmen Cave. Eyre Highway is a 1,660-kilometre (1,030 mi) highway linking Western Australia and South Australia via the Nullarbor Plain. Signed as National Highways 1 and A1, it forms part of Highway 1 and the Australian National Highway network linking Perth and Adelaide. It was named after explorer Edward John Eyre, who was the first European to cross the Nullarbor by land, in 1840–1841. Eyre Highway runs from Norseman in Western Australia, past Eucla, to the state border. Continuing to the South Australian town of Ceduna, it then crosses the top of the Eyre Peninsula before reaching the city of Port Augusta in South Australia. The worlds highest paved international roadway, The Karakoram highway cuts through mountains and canyons to link China and Pakistan. Naturally being a mountainous route, this road is dangerous to begin with. Add in heavy fog, sudden blizzards and flooding and you have a terrifying drive. It doesn’t end there, however, as bandits and terrorists are known to camp out near certain sections of the road, always ready to strike an unsuspecting target. Even if you can handle all of this the highway is so high above sea level that some drivers suffer from altitude sickness thanks to the thin air. Zoji La is a high mountain pass in Jammu and Kashmir, India, located on the Indian National Highway 1D between Srinagar and Leh in the western section of the Himalayan mountain range. Though often referred to as Zojila Pass in the foreign press, the correct English translation is Zoji Pass or simply Zojila, since the suffix \’La\’ itself means pass in several Himalayan languages.
Zoji La is 9 km (5.6 mi) from Sonamarg and provides a vital link between Ladakh and Kashmir Valley. It runs at an elevation of approximately 3,528 metres (11,575 ft), and is the second highest pass after Fotu La on the Srinagar-Leh National Highway. It is often closed during winter, though the Border Roads Organisation (BRO) is working to extend traffic to most parts of the year. The Beacon Force unit of the BRO is responsible for clearing and maintenance of the road during Winter.