In a stress-strain curve there are various regions and limits like you might have heard about elastic limit and yielding point etc. However in this post we will not talk about all of these points and will only discuss about a phenomenon named “Strain Hardening”. 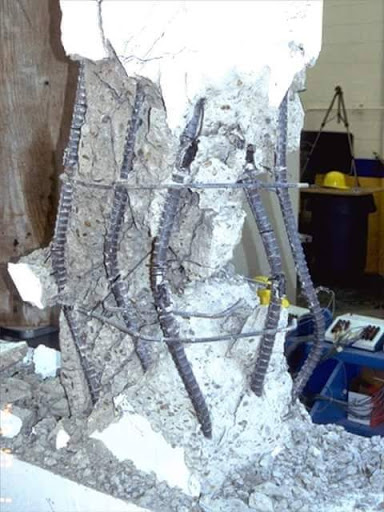 This topic is very important for civil engineers and structural engineers, as the reinforcing steel bars go through this phase during the life time based on the loading condition and stress situation during service of the structure.
When a steel rebar is stressed after elastic limit it enters into its plastic region in which any strain produced would be permanent and no relaxation will be observed afterwards due to residual strain. During this plastic region, the metal undergoes some re-arrangement of atoms and resultantly the dislocation density increase. This increase in density makes the steel harder / stronger from the original condition and thus it needs more stress before reaching further to ultimate tensile strength and fracture.
Here it should be known; that elastic deformation is actually the condition in which the bonds between the atoms of a metal are stretched / disturbed without breaking of any inter-atomic bond. However, plastic deformation involves breaking of inter-atomic bond and afterwards re-arranging of the atoms within the matrix of a metal.
It is further to be noted that after the ultimate tensile strength and before permanent fracture / failure of the rebar the region is sometimes termed as “strain softening” region.
It is interesting fact to be known that all of our structures rely heavily on strain hardening property of steel to show the warning signs before failure because this region can be observed only in ductile metals.
Now let us talk about that rearrangement of atoms as motioned above;
Actually no crystal lattice (network) is ideal and all have some defects called dislocations or crystallographic defects. These defect lines move alone a plane called slip plane. Actually slip plane is the one where atomic density is maximum along closet packed direction. Due to stress these dislocations and defects increases causes more dislocations. These piling up of dislocations is resisted due to presence of barriers like grain boundary etc due to which stress required to deform the specimen increases leading to strain hardening.
Although in this post we talked more about steel however, strain hardening phenomenon is also shown by other metals but not all. Some metals does not possess  strain hardening and are not ductile in nature they are sometimes referred as “Perfectly Plastic Materials”. Such materials will show constant rate of stress increase.
Strain Hardening is sometimes also referred as work hardening as more work is required to break or fracture a material. Strain hardening is sometimes desirable and sometimes detrimental as well. I have worked at site and have noticed many times that when a labor has to cut a rebar for any reason, he has to sometimes needed to replace the cutter. Although the blade wore out but this frequent and abrupt wearing might not happen if the steel rebar would not have shown strain hardening phenomenon.
For any metal, grain size have a great impact on the amount of strain hardening. A metal with small grain size will strain more rapidly than the material with larger grain sizes.
That’s all fellow about work or strain hardening. If you like this article than do share it with your friends and fellows. Stay up-to-date with such new fresh articles and news about civil engineering, material engineering and structural engineering right in your inbox by just subscribing and following our blog. Just enter the email below and hit subscribe.
Tags: Strain Strain Hardening Stress
0 Shares
Share on Facebook Share on Twitter Share on Pinterest Share on Email
Saad Iqbal February 5, 2017

Concrete Compressive Toughness and Flexural toughness, what is the difference?