What is Stepped Foundation

If you are a geotechnical engineer dealing with foundations, mechanics, statics and dynamics of soil; then you must be well aware of the earthquake history, pattern and nature. Geological study of such areas and history of any seismic activity within the region under consideration is pivotal and unavoidable. 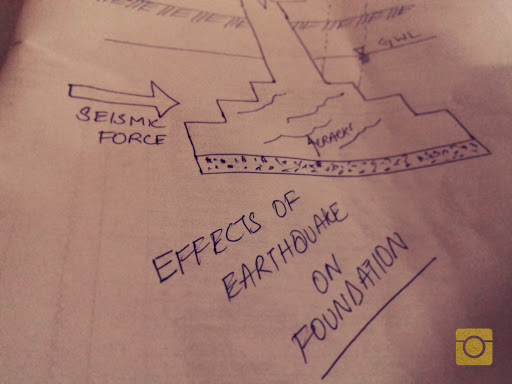 Earthquake is sudden shaking of the earth surface caused by a source of disturbance inside the earth. Earthquakes occur due to sudden mass shifting in bedrock caused by forces within the earth. Shifting bedrock occurs along faults. Such earthquakes are called tectonic earthquakes.
Besides tectonic earthquakes, collapse earthquakes, but such earthquakes are small. The discussions herein are limited only to tectonic earthquakes. There is sudden release of strain energy in the zone where the shifting in bedrock occurs. Shock waves are generated due to release of energy. These shock waves are propagated outward from the earthquake source. When these waves reach the earth surface, its shaking occurs.
Whatever is the type and nature of earthquakes shake, as a geotechnical engineering we must be aware of the vulnerability and hazards that are stated below:-
1. Liquefaction of Soils
In saturated, cohesion-less soils, earthquakes may cause  liquefaction (or quick-sand) conditions when the shear strength is reduced to almost zero. Liquefaction of soils can lead to many types of failures, such as bearing capacity failures, sinking or tilting of buildings, land slides, lateral spreads, and flotation of underground structures. Liquefaction of soils is discussed later.
2. Ground Shaking
Shaking of ground occurs during an earthquake. The intensity, duration and wave form of ground shaking depend upon a number of factors such as the magnitude of earthquake, the depth of focus, the epicentral distance, the energy absorbing nature of the strata, etc.
The intensity of ground shaking at a given location is usually specified in terms of peak ground acceleration (PGA). There is an approximate relationship between the PGA and intensity on MMI scale. To predict the response of soils and foundations, the characteristics of ground shaking are required.
3. Surface rupture
For earthquakes of small magnitudes, the rupture zone occurs deep inside the earth and it does not extend to the ground surface. However, for the earthquakes of magnitude greater than about 6.0 the rupture surface usually appears at the ground. Moreover, as the magnitude of the earthquake increases, the length of rupture surface also increases.
Surface rupture creates a number of problems for buildings, bridges, railways, highways, water supply lines, etc. that are located directly above the fault. It is the usual practice to locate the buildings and structures susceptible to heavy damage not directly over the active faults.
4. Land Slides
Earthquakes can cause land slides and failure of slopes. Even when the slope failures do not occur, tension cracks may appear in the soil. These tension cracks may lead to the formation of water channels, causing softening and saturation of soils.
5. Lateral Spreading
Lateral spreading of soil is the massive horizontal movement of soil layers in a direction parallel to the ground slope. Lateral spreading due to earthquakes is usually observed on very gentle slopes. If the lateral spreading occurs beneath a structure, it can tear it apart, causing heavy damages. In the design of such structures, suitable provisions are made to withstand tensile stresses.
6. Shear Failure of foundations.
Seismic loads acting on a structure are transmitted to the ground through the foundation. This results in an increase in the stresses acting on the soil. However, the soils can withstand seismic stresses without failure if they are not very large. In some cases, when the stresses exceed the shear strength of the soil, the bearing capacity failure may occur. However, shear failures of foundation are not common so long as liquefaction of the soil does not occur.
7. Settlements of Structures
The earthquakes cause cyclic loading on soils. Which may lead to large settlements. Loose sandy soils often compact during the earthquake. Differential settlements can also be substantial. Adequate provisions should be made in the design of structures so that differential do not cause damage.
8. Failure of retaining walls
If the movements caused by the earthquake are large, the retaining walls may fail. When a retaining wall fails, the support it was providing to the soil mass is removed. It may result in heavy damage to adjacent structures such as ports, etc.
9. Tsunamis and Seiches
A tsunami is a huge wave generated in the ocean by an earthquake. These waves travel very fast and cannot be easily detected in open sea. However, when they approach the beach, they suddenly appear as tall waves. These tall waves may cause heavy damages to onshore structures and can lead to loss of life.
A seiche is similar in nature to a tsunami, but it is of much smaller size and it occurs in lakes or rivers. The seiche usually occurs when resonant conditions occur in the lake due to an earthquakes, i.e. when the natural frequency of the lake and that of the earthquake are equal. Sometimes a seiche occurs in a lake when the rupture surface is beneath the lake bed.
Early warning systems should be installed so that suitable actions may be taken by the people at the places where tsuanmis and seiches can occur.
Tags: Earthquake Earthquake Engineering Seismic Activity