What is Waffle Slab? 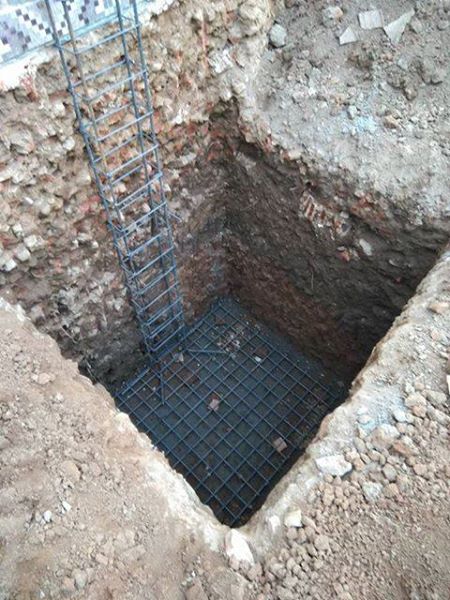 So I am glad that you have asked me “what a waffle slab system is?” – You have asked this question because waffle slab is not that common throughout the world. Its not like a flat slab which is here and there i.e. everywhere – and 90% chance is that the slab shielding you from blue sky above you would also be a flat slab. So as it is not that common; that’s why the people don’t know what is flat slab or how flat slab is constructed or what are the benefits one can drive from kicking in the flat slab.
I have used the word flat slab – and by that I mean the slab that has leveled surface from both top and soffit. Now here I need to clarify that this article will not treat waffle slab foundation – which is another building element used in high cyclonic and windy areas but that is out of the scope of this article. We would be restricting ourselves to understand the waffle slab used as roof slab in buildings. However, the basic terminologies and concept of both roof slab and foundation are similar in nature.
Want to See an Animated video???

The waffle slab is also sometimes termed as ribbed slab system but you would find it interesting to know that ribbed and waffle slab are somehow two different things. When one says ribbed slab it is actually a one way spanning system with ribs where as in waffle slab the joists form a two –way system.

So going back to the basic question that what is waffle slab?

What is Waffle Slab?

The Waffle slab system can be called as a two – way joist slab system which comprises of ribs constructed in perpendicular direction.
Waffle slabs are most suitable for construction of slabs with long span. Slabs that have span greater than 16m can make use of a waffle slab design. This waffled feature in slabs will help to take up heavy loads. Actually the introduction of support hoists made waffle slab very stiff. Technically speaking stiffness is actually the force that is required to produce unit deflection in a structure so if greater the force required that structure would be more stiff and vice versa.
The figure-1 above shows a completed waffle slab. Waffle slab construction will give the underside of the slab structure a different type of aesthetic appearance. The slab will have a waffle appearance underside, but the top surface of the slab will be smooth.

The waffle slabs construction follows two methods:
The former type will have solid heads at the joints with columns. This provision is made to bear the shear requirements faced during the loading conditions.  In the second type of construction a wide solid beam is provided along the centre line of the column which will facilitate the structure to have a uniform depth.

Methodology of Construction for Waffle Slab

In waffle slab the waffles are formed as domes like structure which in general are of standard dimension of 483mm if the ribs are having a width of 127mm and the module formed will have a dimension of 610mm. For ribs with depth 152mm, the domes of dimension 762mm can be used. So we can conclude from this that size of the dome depends on the depth of the ribs or joists.
During the design and construction, it is recommended to avoid the domes near to the columns or near to its vicinity. In practice, the ribs are connected from the columns and beams.
The number of domes formed will vary based on the span length and the loading conditions. This would also affect the number of solid strips that are running between the columns in both the perpendicular directions.
As mentioned in the introduction, the waffle slab forms a combination of ribs or grillage that are running parallel and perpendicular to each other. This hence forms an orthogonal assembly. This arrangement will have voids between the ribs. These voids can be either square or round or any dimension based on the construction pods used.
The pods are actually unit of formwork that are evenly spaced spacers and are usually made of plastic. The pod can be square, cellular EPS blocks or lightweight material as well. After installation of pods reinforcement is fixed with steel mesh and then filled with concrete.

The main advantages of waffle slabs are mentioned below:
1. Highly economical in construction when compared with conventional slab construction
2. These types of slabs can take up higher amount of dead and other loads coming efficiently.
3. Different applications are in hotels, theatre, show rooms and halls where it is necessary to have large column void spaces.
4. Waffle slab prove to be attractive both structurally and aesthetically
Different Waffle Slab Construction Technique
The method used in the construction of waffle slab vary from time to time. The main two methods are:
Each time, the ease of construction is increased. In the case of traditional construction method, the steps involved are the:
The above mentioned traditional method will consume large amount of manpower, resources and time. This resulted in the evolution of precast method for the construction of waffle slab system. This minimizes most of the problems related with the site.
In case of precast construction, proper planning is initially made to construct precast units at the precast plant. With the increase in the production of the components of the waffle slabs, the assembling at the site will also increase. The pre-casted waffle slab units are assembled at the site using hoisting machines and cranes. The concrete is poured into the formwork with utmost accuracy.
This procedure is conducted by placing the machine at proper altitude and position. The main factors that are taken into consideration to facilitate the structural integrity and economy of the waffle slab construction.